In this article, we will describe the most interesting topic – “Best places to visit in China”. China is the 3rd largest country in the world. You will need more than a week just to read guidebook about China. To see all the beauty you need to spend months. But if you are studying in China, you have great opportunities to visit many cities during the holidays. And we are here, to tell you about the most interesting places in China.

Center of the World: Forbidden City 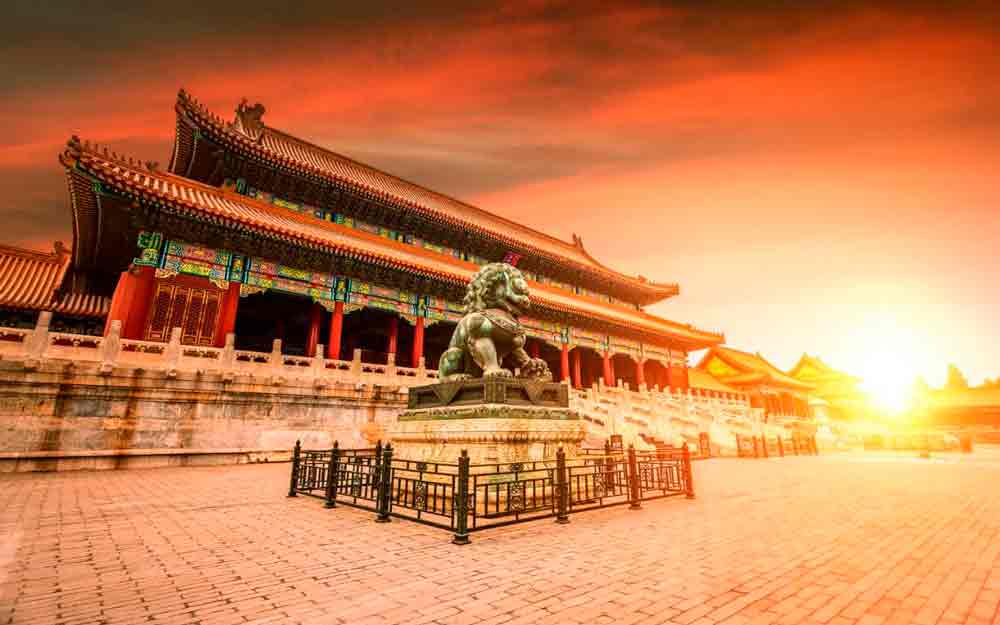 Forbidden City in Beijing – the most beautiful and large palace complex in the world. For almost five centuries, 24 emperors ruled the Middle Kingdom from the “Purple Forbidden City”. They were sons of Heaven, and their palace is the centre of not only China but the entire Earth. It was a city within a city, immersed in ceremonies and rituals, consisting of signs and symbols, closed to outsiders. Nowadays, Forbidden City is a part of the Palace Museum, also known as Gugun, “former palace”. Gugun as Hermitage, it is impossible to see everything at one time. Before visiting that place, we advise you to read the book “The Last Emperor of China. Pu Y”. 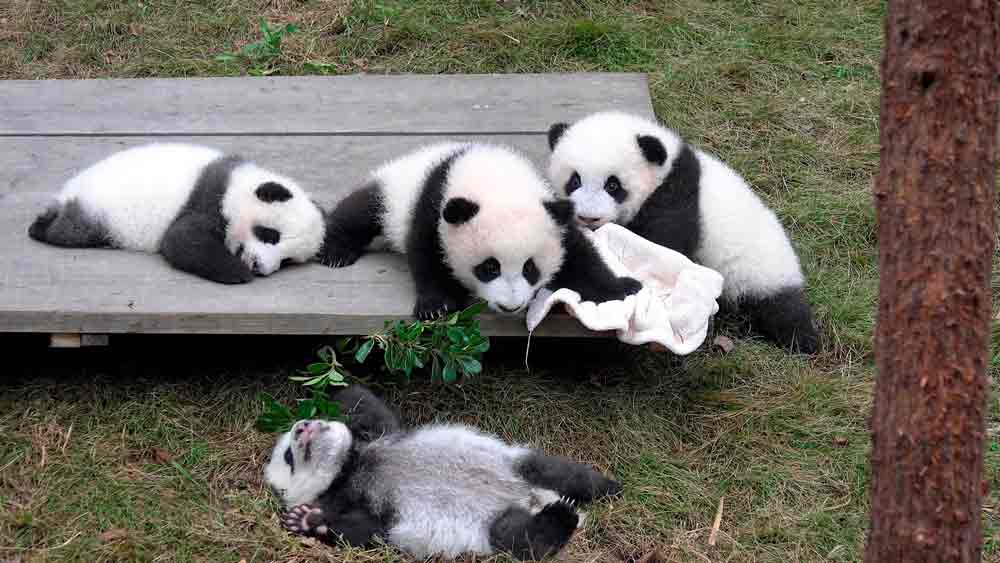 the Giant panda is the same symbol of the Middle Kingdom as the Dragon and the Great Wall. In the 20th century, the Chinese used panda-diplomacy: they gave rare animals to other states to build relationships. Now you can find pandas in the Sichuan province.

One of the best places to get know black-white teddy bears is the Chengdu Research Base of Giant Panda Breeding. It is better to arrive by 9 am when the pandas wake up for breakfast. After they will sleep until noon. Also, you can meet the Red Panda. It is about the size of a large cat, looks like a raccoon and belongs to a different family, but also adorable.

Oasis on the Silk Road: Kashgar 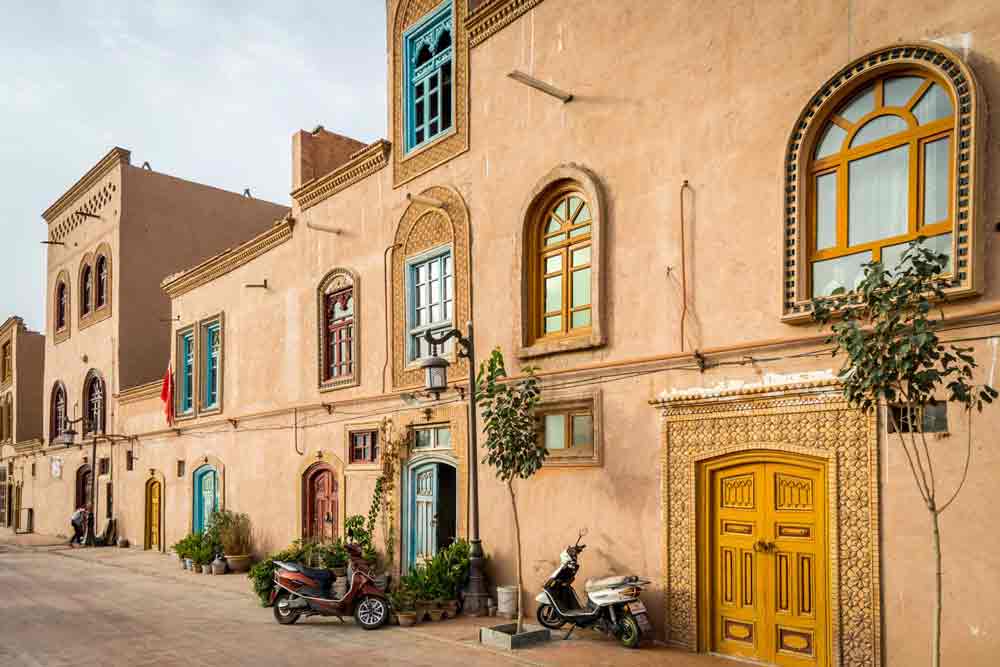 The Great Silk Road – an ancient system of caravan trails, connecting Europe and Asia. The largest and prosperous cities had grown where the paths crossed. One of them is Kashgar on the western border of the giant Taklamakan desert, on the very edge of the Middle Kingdom. In Kashgar, you feel like you are not in China but in Samarkand or Osh. The same melons, tortillas from tandoor and pilaf, the same noisy bazaars and beautiful mosques.

Like other Chinese cities where small peoples live, Kashgar is divided into two different parts: the old Uyghur and the new typical Chinese. The new one quickly absorbs the old one, so hurry up if you want to see the real Kashgar. Spices, dried fruits, variegated fabrics, carpets, musical instruments, bowls – you will definitely find excellent gifts and souvenirs in local shopping stalls rows.

Lake Qiandaohu arose when a hydroelectric dam was built on the Xin An River. The water spread and flooded a huge piece of land. You will be able to see only tops of mountains and hills, which make a view of a thousand islands. We advise you to take a boat ride on it. Just make sure that your guide speaks English, otherwise, you won’t learn local legend.

There ar e many stories about the Lake of Thousand Islands. Almost three dozen cities and a thousand villages are buried under the water. The most interesting city is Shi Chen, the “Lion City”, built over 1.300 years ago. Stone dragons, temples with curved roofs, thick walls of houses – all this can be seen if you decide to dive.

An army that is 2,200 years old: Terracotta Army 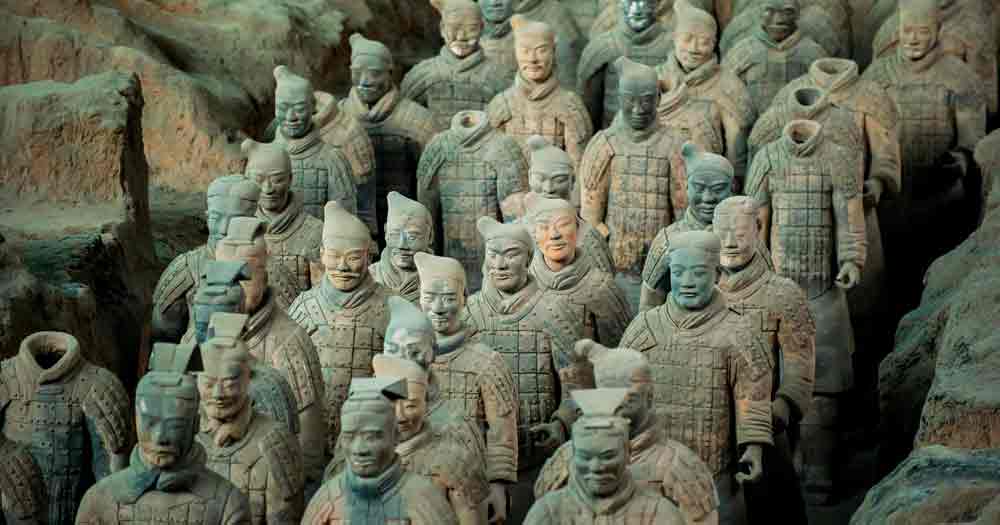 In 1974, the peasants decided to build a well in the vicinity of Xi’an, but instead of water, they got a full-length clay statue of a warrior. Then it turned out that there were thousands of warriors, and they all looked to the east. So they found a terracotta army, which was buried 22 centuries ago together with Emperor Qin Shi Huang, to protect him in the afterlife.

The terracotta warriors are “stationed” in three pavilions 35 km from Xi’an. See for yourself: there are no statues with identical faces here. Some stay very close – under the glass, as in an ordinary museum. Then you can see that everything – clothes, hairstyles, shoes – is done with amazing realism. The pavilions also keep the figures of warriors in their original form. They are brightly painted in all colours of the rainbow.

In the country of snow: Lhasa 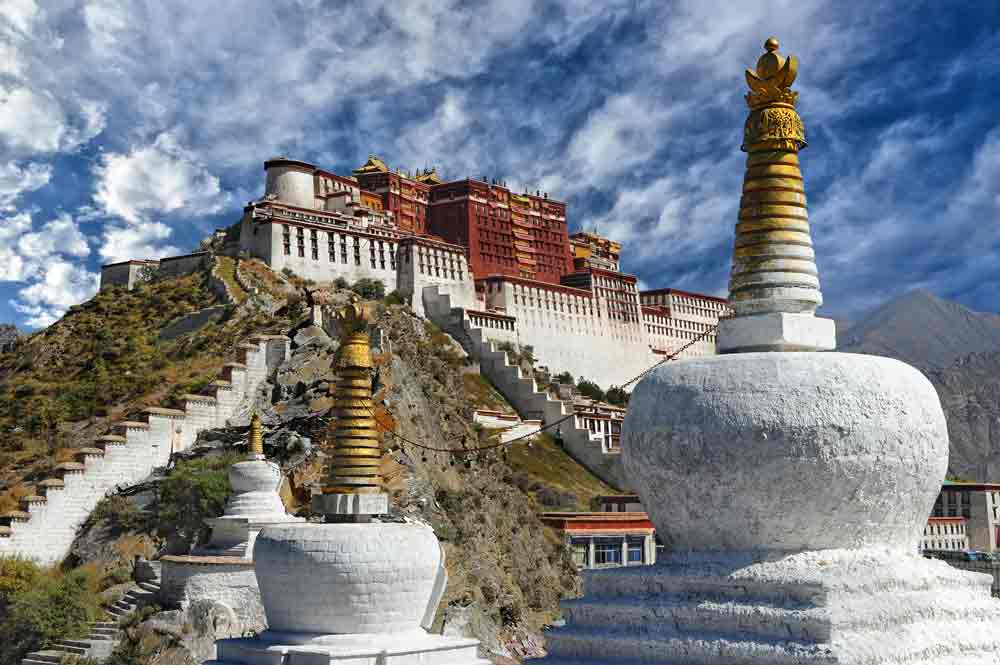 One of the most isolated cities in the world has always attracted Western travellers. But until the end of the 20th century, few people managed to visit Lhasa. Now it is easy to get to the “roof of the world”, you just need to take care of the formalities. According to Chinese rules, a trip to the Tibet Autonomous Region must be organized by a travel agency, which will take care of permits and other nuances.

Life in the old city revolves around the Jokhang Temple, founded in the 7th century by King Songtsen Gampo. A stream of colourful pilgrims flows along Barkhor Street, which encircles the temple. Join them for five or six circles around the Jokhang and walk into a dozen shops with flashy jewellery, thangka paintings and striped Tibetan aprons, then take a break. Drink Chang – a low-alcohol barley beer, and try Shemdre – a simple, hearty dish made from rice, potatoes and yak.

In the footsteps of the emperor: Huangshan mountain 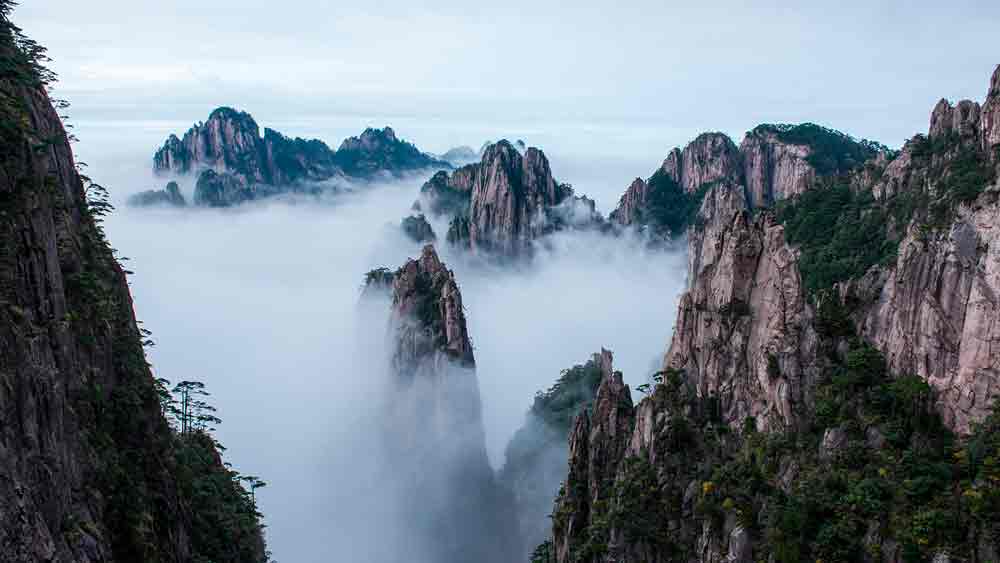 The mountains of Huangshan floating in the clouds have been inspiring poets and artists for a long time. Even James Cameron admitted that he was looking for inspiration for Avatar. The place is really impressive: the rocks are steeply going up, the paths are laid over the rye, and the waterfalls seem to be pouring straight from the sky. When the pointed peaks plunge into the fog, you feel like a character from a Chinese ink painting.

Climb Huangshan by cable car or on foot. Legend states that the “Yellow Emperor” and the progenitor of all Chinese invented the elixir of immortality at this peak – what if you get lucky? And you also have a very real chance to see Gloria – your shadow, surrounded by coloured rings. In China, this optical phenomenon is called the light of the Buddha. 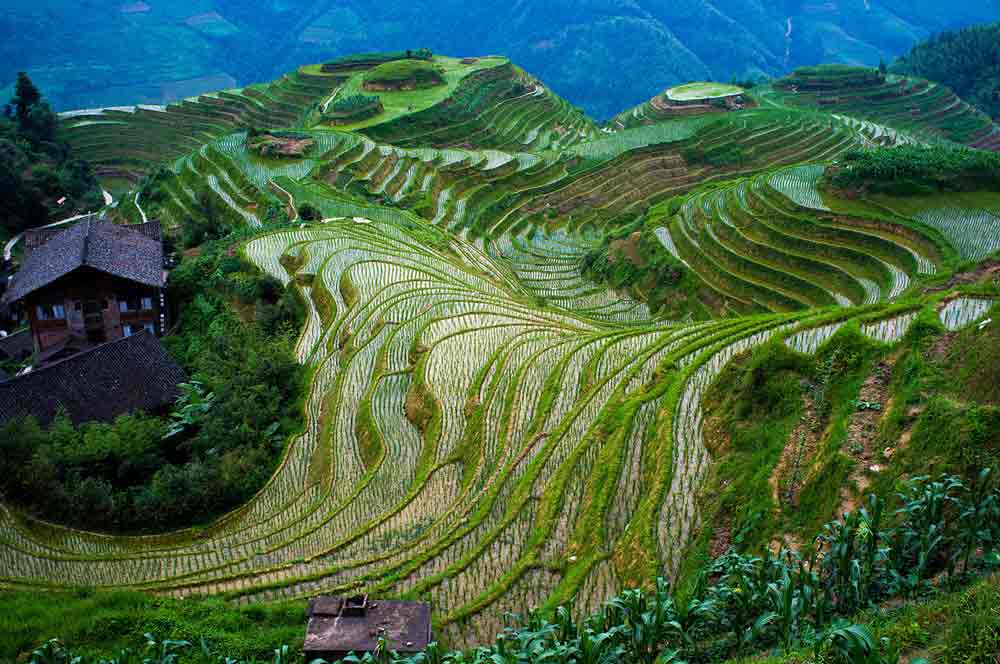 Longji rice terraces are awesome at any time of the year. If you arrive in May, you will see how sprouts are planted and the water fills terraces which reflects the sky. In summer, Dragon’s Ridge turns green – you can’t imagine brighter! In early October, you will see the golden harvest, and by winter you can wander around the snowy amphitheatre in the mountains.

There are lovely villages between the rice steps. Spend the night in an atmospheric wooden guesthouse overlooking the terraced fields. Get know the local Zhuang, Yao, Miao and Dong peoples at the same time. A little training – and you will remember that Miao women love pleated skirts. And Yao is easy to recognize by their unusual hairstyle: they cut their hair only once in their life – at 16 years old. 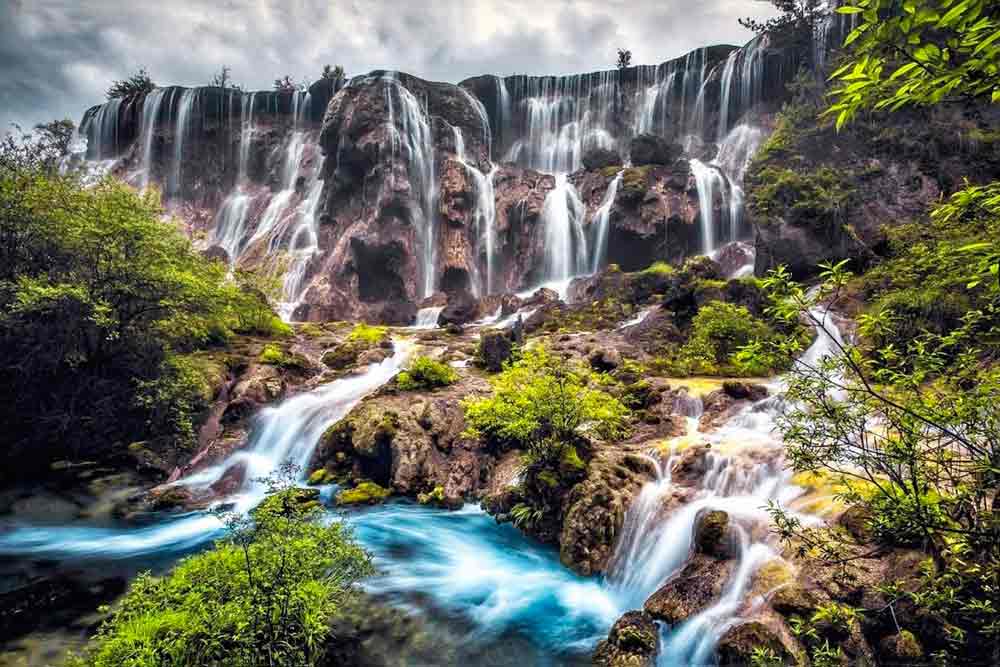 Jiuzhaigou Nature Reserve is hiding in the mountains in the north of Sichuan province. Jiuzhaigou has high wooded mountains, noisy waterfalls and dozens of colourful lakes. In the clear water of which lie natural art objects from fallen trees. The Chinese gave everyone romantic names like Swan Lake, Bamboo Arrows Lakel, Sleeping Dragon Lake or Pearl Waterfall.

In shape, Jiuzhaigou is similar to the letter Y. Buses will deliver you from one awesome place to another. But getting into the reserve itself is more difficult. You have two ways: from Chengdu or from Jiuzhaigou. You need to shake the mountain road for a long time on the bus from Chengdu. Or land at the Jiuzhaigou Huanglong airport (3448 meters), and then another hour by minibus. 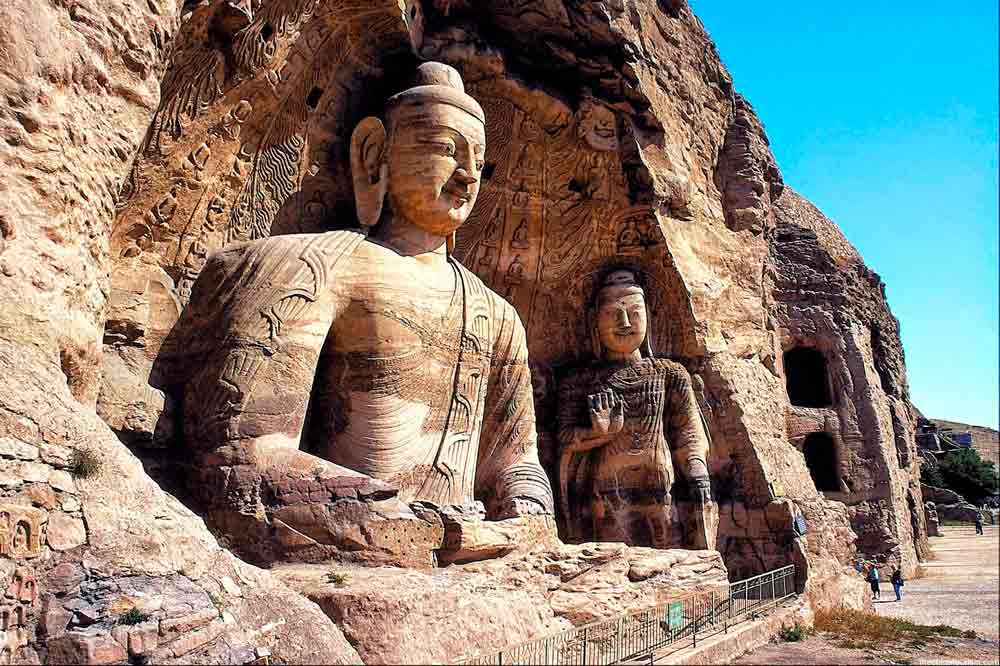 The Mogao Caves is a temple complex from the earliest history of Chinese Buddhism. You need to look for it in the southeast of the Taklamakan Desert, where in ancient times two branches of the Great Silk Road were connected. Through these places, merchants delivered carpets, wool and precious stones to China, and also religions. Since the 4th century, Buddhist monks have carved caves here and decorated them with skilful frescoes. The grottoes of Mogao, or the Caves of a Thousand Buddhas, are well worth the journey of any difficulty.

If you are interested in studying in China, please, contact our consultants. Also, you can ask your questions in the comments below. If you are redy for trip to China, we advise you to read that article: “What to pack for China?”.